Early one morning in May 1993, two
boiler-suited figures appears on Berlin`s
melancholy socialiste boulevard, Leipziger
Strasse. They unpacked their house-paint
and brushes and set to work renovating an
abandoned bus-stop right in front of the
Post Museum. People scurrying by, most
of them employees at the nearby Treuhand
(an organization devoted to bringing the
GDR`s institutions into the privat economy
thought the renovation was an official measure 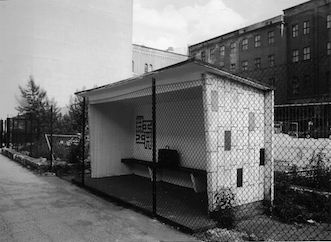 but the two painters were acting of their own bat.
After the renovation, the roofed and paneled
structure was unchanged apart from the two minor
details: an ominous `H`for Haltestelle (bus-stop) was
painted on the wall four times, and a deceptively
life-like plaster briefcase was placed on the bench.
Days later, when the whole area had been fenced off
as a building site, the briefcase was still waiting of its
owner to come and reclaim it.